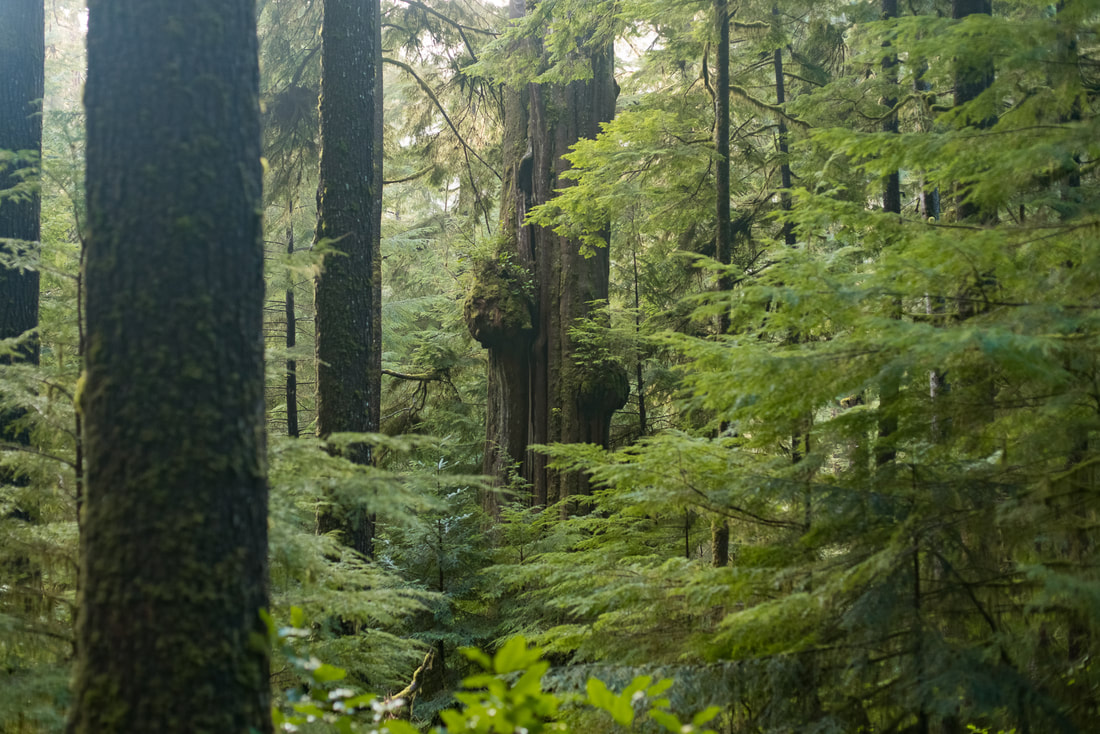 Ecological, Political and Cultural Context ​
Ancient temperate rainforests store more carbon than any other ecosystem on earth and support an incredibly rich diversity of flora and fauna, many of which are endangered. Less than 2.7% of the original primeval forests remain on Vancouver Island, and approximately 32 soccer fields a day are cut on Vancouver Island alone. Teal Jones plans to clearcut the last unprotected stands of ancient rainforest in Tree Farm License 46, and it’s estimated that within 5 years they will be gone.

In August 2020, a non-violent blockade was established to prevent road building into the Fairy Creek watershed near Port Renfrew, the last unprotected intact valley on southern Vancouver Island. In December additional camps were created throughout Tree Farm License 46, including the location at Eden Grove, across the bridge from where the studio tent was positioned from March to June of that year. In June the RCMP moved in and demolished the forest protection camp, and the studio tent was removed by the curator a few days prior. Over 1,100 arrests were made at the Fairy Creek blockades, making it the largest civil disobedience movement on B.C.'s history. The camps shut down when logging was halted over the winter. The artist in residence program ran at arms length from the blockades, and artists bore witness to the forest and the direct action movement, creating a space for dialogue and contemplation.

The forest protection camps have been welcomed by Elder Bill Jones, hereditary chief Victor Peter and other supportive members of the Pacheedaht and Dididaht Nations who feel it is their responsibility to protect the ancient forests on their unceded territory for future generations. However, elected Chief Jeff Jones has spoken out against the blockades. Unfortunately, the revenue sharing agreement signed by the elected Chief contain gag orders preventing band members from speaking out against logging activities.

The BC NDP government promised in their election campaign to preserve old growth forests, and they commissioned the Old Growth Strategic Review Panel to provide recommendations about the future of old growth logging in the province. In September 2020 the report was released. The panel's response was clear: stop logging old growth within 6 months, consult with First Nations and shift to a sustainable forest industry based on second and third growth forests. Later that month, the Union of BC Indian Chiefs called for the government to implement all 14 recommendations including an immediate moratorium on old growth logging and providing support for economic alternatives to clearcutting on Indigenous territories. So far the BC NDP has been dragging their heels. Logging continues in many areas government claimed have been deferred.